We all met again after 10 months!
Pero parang hindi naman namin namiss ang each other thanks to Twitter and FB. It's just that, iba pa rin yung mismong mga tao yung kaharap at kausap mo.
So here we are in our kind of comfortable poses (you'll understand later on) after dinner in Jack's Loft in Eastwood. 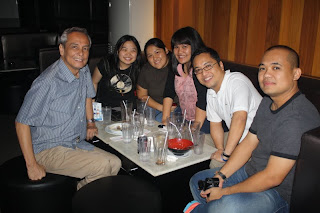 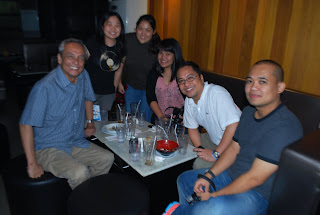 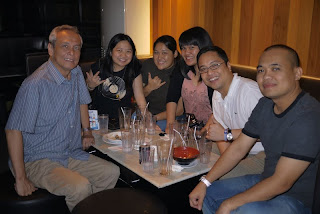 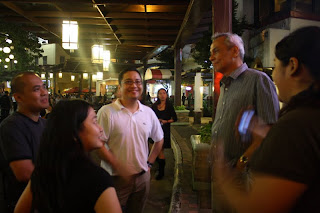 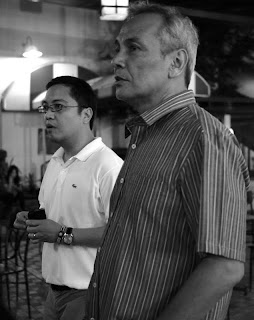 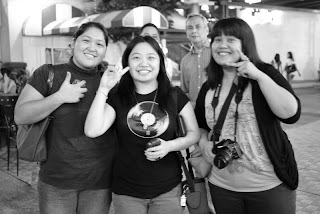 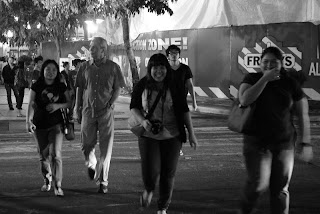 When Jim and Jorenz left, Aicca, Myles, Sanndra and I stayed since we didn't have immediate things to attend to. We had coffee and blueberry cheesecake at Dome and continued to talk about random things.
For the first time, I shared my fears and apprehensions to them about continuing my second degree, Film.
But it always feel good to know that despite these, you have people who are willing to help you achieve your dream.
So you're wondering how we all ended up knowing each other? I should probably go back 10 months backwards.
Jim Paredes, yes The Jim Paredes started it all in November when he posted in his Tumblr and Twitter account that he was looking for individuals who have extreme passion on what they are doing. Initially, he requested for a media practitioner, a lawyer, a politician, a nun and a priest. But on the night of November 26, 8 people turned out in his Loyola Heights home--a lawyer, a pre-school teacher, an astronomer, a traveller, a graphic designer, an architect, a nurse and me--call center supervisor. We were supposed to email him about what our passions are and to tell something about ourselves. He will choose 8 passionate people who will share an after-dinner conversation with him.
I arrived exactly 8:30 pm in his house. I still cannot explain that child in me when I first saw him. It was a lifelong dream to meet one of the people I look up to. And to actually have a chance to talk to him and know him quite deeper than the Jim we all know, was simply magical.
He ushered me to his dining table and offered coffee. He told us that his daughter has cooked sardine pizza which he will serve a little later when all the others have arrived.
The night started out with some semi-formal introduction and went on to the many stories we've shared. The topics ranged from what our usual day look like to Living Divinities to vinyl collections and butandings of Sorsogon and Redford White and Muhammad Ali. Never did a single moment that night that the conversation was centered to Jim, which I kind of expected since he's the most experienced one and with his brilliance on the arts, it's but expected that we hear more stories from him. But it didn't happened. He was just there to share his home and his stories just like each and everyone of us.
Jorenz is a lawyer who in has a wide collection of vinyls and who's passion is music. Since JIm and Jorenz were of almost the same generation, they mentioned quite a number of music geniuses which we all loved, though some, we were only able to read in books or internet. Later on, I realized how well read he was and I would usually tease him now a the walking Google for his wide knowledge on virtually anything under the sun-- from local politics to Hollywood news, Martial Law to the current planking issues. Name it, he sure has something to say about it.
Jumax is a mother of three who unbelievably flies home to Cebu every weekend to be with her three beautiful girls. I can pretty well predict that she's not having the time of her life here in Manila because of the traffic and the weather, so as of this writing, I was glad to hear that she already found a job in Cebu and looks like she'll be staying there for good.
Steffi is a pre-school teacher, or aspiring one who also works for Gawad Kalinga. She was very soft spoken but when she started talking, she also started to make deeper sense. She, I assume, was also the youngest among us.
Sanndra, a traveller shared with us her adventures from her bus trips to airplane rides from all over the country and how she finds her inner peace among the chaos of travelling in backpack or in style. She recently travelled to Europe (which I envy the most) and continues to hop the Pihilippine Islands whenever she can. Before we parted ways that night, she asked me where I exactly worked and told her that I worked for PeopleSupport. She mentioned that her father used to work for us and turned out that he was also from the same account as mine. Small world indeed.
Aicca graduated Nursing but didn't really want to pursue working in shifts at the hospital so started out a Music site-- which by the way is her true passion. She now works in a call center as a Human Resource person.
Erika, an astronomer says she started out as a geologist since that was the closest degree she could finish to end up being an astronomer. She' doing quite well in her field. She's got numerous citations for her expertise in astronomy.
Myles, father of three and a graphic designer told me to rush to make mistakes. Myles employs a kind of out-of-the-box parenting. He shares that when they're 3 child was born, they (his wife) both asked their children to name the 3rd baby, because they're done with naming the first two. So they passed on the responsibilities to the Ates. The two, Milan and Audrey named their baby sis, Paprika-- which I think was cool, like their parents. :)
Facebook and Twitter have become our means to communicate that during the second time we've convene, it seems that we never really been away for months. We missed Erika, Jumax and Steffi during that night though.
I hope I got everything right. But really, the bottom of all of these, I shared a night with people that are committed to their passion and somehow that powerful force engulfed me to be the same. I love them and how they inspire me to go after my dreams. 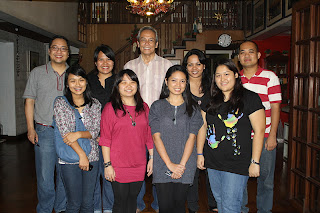 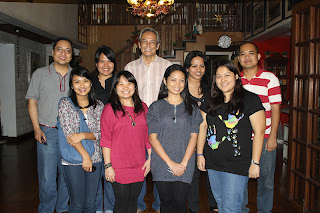 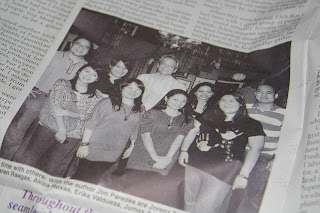 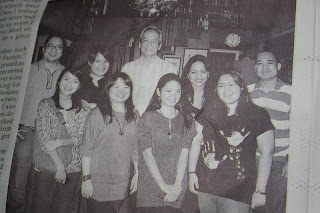 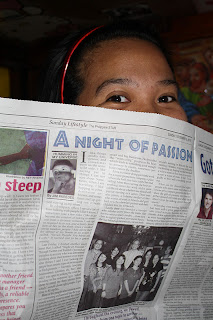 ---
Several people asked what I wrote to Jim. So here it is:
Hello Sir Jim,
Im Karen Raagas. 25 years old who works as a call center supervisor in Ayala. I work during nighttime for almost 5 years now. I graduated Literature from UP VIsayas some 4 years ago. Last year, I applied for the UP Film Institute to pursue Film as my 2nd degree--halfway through my 2nd year in the intitute, I decided to file for LOA when my left foot got seriously sprained. When it became a little ok, I tried to go back to travelling. I intend to go back to film school next year-- for now, I'm trying to enjoy going to different places while my schedule still allow me to. I get longer sleep time these days. When in filmschool, I only get to sleep about 3 hours in a day. But I hold no regrets of being sleep-deprived because although my work in a call center "kills" me, it is also the very reason why I can "revive" my passion for the arts--for film specifically, it is in fact a very expensive course and my family doesn't have that much to spend, so I send myself to school and support my family at the same time. I simply can't lose it.
I joined UPFI last year when my surrogate father died, the late Dr. Ed Alegre of UP. I promised him on several instances that I shall join the film institute. But it never happened until finally after he died, I felt I really had to keep my promise. While at the institute, I realized that I had to do it because I want it, and not for anyone else. When I come back next academic year, I shall have that mindset, hoping it would make a big difference on how I see things. I will go back to film school because I want to, because 50 or 70 years from now, when I look back to what I did in my stay here on earth, I shall regret nothing because I did everything I could while I still can. And so I will not use the word "frustrated, if only, had I"...
Honestly, I have not been fully aware of what's happening in the country. I only get snippets of daily news from my agents, (i have around 18 people under my team) of what's going on lately. I have no time to watch the evening news and is too tired to read the dailies in the morning when I get home after shift. But it doesn't make me less of a responsible Filipino citizen. I pay taxes on time (which pains me because we pay really high taxes in the industry and the money goes to somewhere we don't know and where it is not necessarily have to go to), fall in line in public offices, I vote, I recycle and just like everyone, wish to have a peaceful society where we fear nothing in the streets when we hail for cabs on our way to work at night.
I wish to travel to Italy where people knows how to work hard and actually hate it so they make sure they have fun and really good food after a day's work. :)
I have no plans of going abroad to work unlike what my mother wants me to. Being a UP scholar, I feel that I owe the people who paid for their taxes to send me to school a lot. So i'll stay. And I think, this country still need me. here.
By the way, I speak Waray and Cebuano fluently. And understands majority of the languages in the Visayas. But I born an raised here in Makati. :)
Thanks Sir Jim.
And the rest as they say is history. :)
Posted by karenderya at 6:32 PM