I have always loved this siday written by one of my best friends, Maphene.
And still holds truth to this day.

Thank goodness
for the waves, for coming back
to save
the barren shore.
Posted by karenderya at 8:16 AM No comments:

Today, I hugged Tito Kier twice before he finally go.
It's his last day today in the office. I almost forgot that it was his last day today, good thing I was chatting with some of my agents who were on lunch when he logged out of the clock for the last time.
The first hug was offerred by him. My reaction did not automatically kicked in but I knew something was different since Tito Kier does not always do that. He is one of the most reserved persons I know in my life-- and the person who makes it really hard for me to tell what his emotions are because 98% of the time he sports a poker face. The second hug was what I offerred after he logged out, when I finally realized what it actually was for.

When I went back to my station to continue with my pending deliverables, here's what I got from my email which almost made me cry:


I would just like to take this opportunity to thank everyone.   I would say that working with you and APS has been the most memorable experience in my career.
I wish everyone success.  It was a privilege working with the best and I couldn’t ask for more.  Thank you for all the support.  Take care and God speed.

I have worked with him for roughly 3 years in the company and seldom had I seen him laugh, smile and chuckle. 98% of those laugh ans smiles I saw during his wedding (please see previous posts) which kind of a good feeling everytime. Maybe because it's rare.

I have never seen another person as OC as he is and who smell as good as him from 20 meters away.

You see, resignations are as good as someone leaving the country for a long period of time. We console ourselves that Facebook, Twitter and Yahoo are just there to connect us, but really, even with these technologies, there are some that we just lose along the years. Tito Kier does not have a Facebook account by the way.


I will miss you Tito Kier.
Posted by karenderya at 7:22 AM No comments:

Apples, Blackberries and the Fact That They are not Just Fruits Nowadays

I am a proud iPhone owner for quite sometime now. I love how friendly this phone really is especially for people like me who's mantra is "life is too short to read the user manual". I love how useful the Apps are (albeit, you have to buy most of them)-- I find it cute to think that when one tries to hold the apps (for you to either delete or move them) the apps actually talk among each other (while shaking) "naku, sinu na kayang isusunod idelete sa tin?" or "nakuuu, ayokong matabi sa kanyaaaaaa.waaaaah"; I love how sensitive the touch screen is. I would no longer elaborate on its resolution and the camera plus the sleek design. iPhone IS iPhone.

Then there's Blackberry. The phone when years ago, only the corporate folks could appreciate and could stand its boring visage. But now, especially now that it's 13th month pay season, you find almost every minute, people updating their FB status of their BBM pin.

So now I own both. My friends have switched to using BB instead of Nokia or SE or Samsung. iPhone is quite pricey and since there are also apps in Android market which can also be used for iPhone, the world is eternally connected. Hindi naman ako papahuli. So I bought the cheapest BB.

But there goes the nightmare of getting used to it. Before I was able to have my BBM and other apps work, it took me 7 restoration of the old settings, contacting Globe almost every 3 minutes and updating the installer everynow and then. I am not sure if other BB users went through the same thing but that was a week of setting it up and getting the hang of it.

As for iPhone, I did not go through the same Dark Age as I was a previous iPod user. I got used to the synching thing. But I still imagine how would it look like had I not been an Apple user before.

These are my first world pains.
These things I rant about are mundane but at the same time so complex that it reminds me how simple and peaceful my life was with Nokia 3310 and 3100.

This whole technology thing has taken its toll on me.
But hell no, I'm not complaining.

But don't you think sometimes, you wish Apples and Blackberries were simply just fruits and just mere fruits?
Posted by karenderya at 8:30 AM No comments:

If you can't stand seeing me in my pictures growing from a size 12 to now 18, please keep it to yourselves. Not that I ignore the subsequent health issues but because i have other things in mind.

Your jokes may sound funny and light to you, mocking my weight and my size but picture this-- going to the mall scouting for a wardrobe for the company party, a friend's wedding, a cocktail--looking for a nice and decent pants or dress or skirt in forever 21, finding the shabby one and confidently taking it to the fitting room knowing it would fit you but surprise surprise, it doesn't; or maybe it does but you look awful. You walk out of the fitting room with a broken heart knowing it's the last pair that has the potential of fitting and you then change your wish that something out there will fit you, regardless of how it looks like or how much is it as long as it fits you. But you find nothing. You resort to going to surplus shops where you find cheap and inaapropriate clothes for a party let's say. On better days, you come home with a bag of jeans but never has it been that you got excited fr wearing it because you know, somewhere in your heart that that is not what you really wanted. But in normal rains, your heart is what's making your paper bag heavy.

I go through that everytime i need to attend a party or a gathering.

So please-- i don't appreciate your comments about me skipping from size 12 to 18. I really don't. I have issues myself which you will never understand why. So please keep it to yourself.

And I will change because I am ready to--not because that top in Mango looks pretty.

Karen(the now size 18)
Posted by karenderya at 2:59 PM No comments:

Dreams and smoke and evaporation

I have always wanted to be in film. Now, when I realized that my dreams are not enough for me to thrive, things fall apart. My life in a complete halt. Now I wait as I see people walk passed by me claiming their dreams. While I wait for mine to be fully exhausted.

I am never good at anything. I see smoke coming out of my pockets.

Now they are nothing but vapor.
Posted by karenderya at 2:36 PM No comments:

UP Cineastes Studio Application for 2011B!

My kick-ass org is hitting it again! 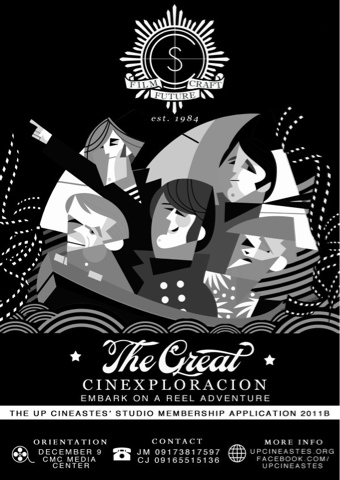 Posted by karenderya at 2:25 PM No comments: